I sat down to ask my father about the Caracazo, about he remembered and why he thought it happened. I was eager for answers…but not as eager as he was.

He was on his way to Venevisión, early in the morning that day, as 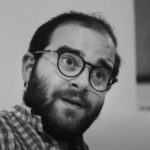 usual. This time, however, he could not reach the station. Almost there, approaching the junction between Avenida Maripérez and the Andrés Bello that 28th of February of 1989, he had to stop. He knew there’d been protests the day before, that he had to get to work all the more for it, but he never imagined what was waiting for him there.

Journalists, like good doctors, are at their element when their subject matter is at its illest. Their duty is to keep a cool head, observe, examine and tell. But this time the festering body, the turba, was in no mood for questions or treatments. Boisterous, violent, indomitable, what laid ahead in Maripérez was a blockade of people, armed and plundering, so carried away by —what: ire, hysteria, ecstasy?— that it was as if the patient had suddenly woken and up punched the doctor. In utter fear and bewilderment — “from what hell had this come from?” — he retreated back home.

I’ve been asking my father questions throughout my life, yet few have elicited an answer as complex as when I asked about the Caracazo.

“I really don’t know what happened then,” he begins. “All I know is that that day the country saw itself in the mirror and for the first time it could not recognize itself”.

Prod him as I might, all I initially reaped was a collection of images and associations that spoke only dimly to each other. The carcass of a bus, a parade of looted refrigerators, fans, TV sets, microwaves; protests spreading through the city like fire through the Avila, running down its hills in deafening roars; young soldiers from the countryside going into the Valley for the first time, shooting with cowardice, in panic, indiscriminately at the hysterical masses; “el policía” Alejandro Izaguirre, then Interior Minister, live on Cadena Nacional trying to explain the situation to a bewildered country, suddenly saying “perdón, no puedo” and leaving a lone microphone behind; kinsmen locking themselves up inside their homes at night, retreating from the city outside as if recoiling from a pet dog after an unexpected, vicious bite.

In short: the impossible thought of a city in the middle of an epileptic fit.

For an event that has been variously defined as the end of all attempts at macroeconomic reform in Venezuela, as the first of a series of defeats of a generation that, though educated abroad, was unable to bring back much of what it had learned and the beginning of a new, darker, more violent form of populism, such vague comprehension of the true causes of the Caracazo borders on the irresponsible.

Yet the events of that day confound our prodding questions:

Was it just the bus fare hike, contrasted with CAP’s recent coronation?

“Yes,” says my father, “but then why would people also loot vacuum cleaners?’

What made the violence spread? Was it the heavy-handed repression at the hands of security forces or was there something inherent in us that day that made us prone to it?

“The security forces made victims of looters as well as innocent protesters, exacerbating the violence, but that had started before they went out and was already on a massive scale when they acted.”

If the macroeconomic adjustments had only just begun, then why were the people so ready to flip the table before receiving their second paycheck that month?

“I don’t know. If you see the economic data of those years it is nothing in comparison to what we’re going through these days…”

So were they really, then, that angry?

“I guess so, but hijo, it was really so over-the-top, so out of hand…”

When they were smashing the windows, was it anger, frustration or libertinage that…?

“Listen: in many ways that’s beside the point, because maybe it’s too early to know or because maybe we will never know, yet what matters most is that that day Venezuela saw within itself something it had never seen before. Something that reminds of the chaos and frustration we’re living through these days. As hard to pin down then as it is now — it simply took us all by surprise. And though no one understands what really happened, or why, its legacy is as concrete as its causes are vague”.

Yes, the myth: that day Chavismo was born and macroeconomic restructuring became the new bogeyman in the collective subconscious.

“Not only that: many have tried to appropriate that legacy. Ramos Allup never gets tired of reminding us that he has obra escrita, a publication history, opposing neoliberalism, for example. And now many within Chavismo have even tried to retroactively procure some responsibility for themselves of those days’ events, even though I seriously doubt that any given political group could have, then or now, masterminded a chaos so perfect.”

Chaos, questions that can only be answered by questions, no main, sole culprit other than this sudden and unrecognizable hysteria — can such a foundational event to our recent history be so unexplainable that it even seems accidental? Is really that the best we can do?

“I don’t know…. You’re right, maybe we were living a fantasy, perhaps all that anger had been accumulating many quinquenios before, maybe something that had started on such a sure footing, our democratic process, had really lost its way many years since” he says, turning increasingly taciturn.

“But then, if we go down that path, what is left to us but admit the Caracazo signaled our failure as a society?” He asked rhetorically.

Then it hit me. Today, I was not the one most eager for answers.

These questions, as obvious to me as to anyone confronted with the facts, found their urgency not in the simple curiosity of knowing about something I had not lived through. It isn’t like when I would sit and ask him about the Romans or the World Wars, letting him impart his knowledge and satisfy my nosiness in a simple exchange; or when I would ask about my grandfather, whom I never met.

These questions found urgency in the cloud of fear and mystery he, alongside most in his generation, had evasively shrouded them in 27 years ago. It was to himself and to his generation he was seeking both the right questions and the answers to them. The urgency was not mine: it was his.

You say you were afraid those days, as were the young soldiers from the countryside and policía Izaguirre in his retreat from the cameras. You say that going to Venevisión that day you saw a throng of people going down the street in what you describe as an irate frenzy, that throughout its existence Chavismo has made use of that very fear you then felt — what, then, in essence were you all fearing?

“The fear of realising that after so many years of prosperity we really did have that frustration, anger and humiliation within us. That that violence there was ours. That it came from us. And that it could come again — as it did indeed, as we now see on a daily basis. Which maybe is why we don’t want to think much about the Caracazo — why remember the threat when you have its daily manifestation? All fear is in essence fear of oneself.”

I don’t know what caused the Caracazo. But perhaps I now know why we don’t know. We still fear the reflection that springs from it: the Venezuela that was to come, that we now see and after all these years still struggle to recognize.