A caravan of armored vehicles pulled up. Throngs broke through a rank of police officers to get close to the man. Juan Guaidó stepped out, leaped atop a pickup truck and seized a microphone.

“I’m not asking you to trust me but to trust yourselves,” he said. “It’s our job to reclaim our lives, our normalcy and our Venezuela.”

The crowd erupted in cheers.

This is not how it was supposed to go for Guaidó. The National Assembly leader declared himself Venezuela’s interim president in January and quickly won recognition from the United States and dozens of other countries as he prepared to take control of the struggling South American nation. But three months later, the military has remained loyal to President Nicolás Maduro, and increasing U.S. sanctions and threats have yet to dislodge him.

So this is Plan B: an election-style campaign in a country with no plans for an election. Guaidó is traveling Venezuela, addressing crowds and meeting with interest groups, as aides develop a governing platform, recruit local committee members and try to raise money.

Organizers say the effort is modeled, in part, on a presidential run — and on one level, it’s working. At the start of the year, the 35-year-old leader of the center-left Popular Will party was a relative unknown in national politics. Now he commands crowds in many corners of the country and has a national approval rating around 60 percent.

“We’ve never had a critical mass of discontent and been able to harness that to take it to the streets,” said lawmaker Freddy Superlano, the campaign’s chief architect. “We need to show that we are the majority.”

“Bringing about political change in Venezuela is complicated,” said Félix Seijas, director of the Delphos polling agency in Caracas. “The only way forward is to create a crisis within the bases that sustain the government, which are the military and civilian support.”

Maduro, who claimed victory last year in elections widely viewed as fraudulent, has responded to Guaidó with sizable demonstrations of his own. He has called the opposition leader a “puppet,” a “clown” and a “Judas that has tried to have the U.S. empire take over our country politically and militarily.”

Maduro is backed by Russia, China and Cuba. His government has lifted Guaidó’s parliamentary immunity, barred him from leaving the country and detained his allies. Masked, motorcycle-riding, Maduro-supporting paramilitaries known as “ colectivos” have menaced opposition protests. Intelligence police detained a sound crew setting up speakers at one Guaidó event, and Guaidó accused the government of cutting power to another.

Maduro’s Ministry of Communications did not respond to requests for comment.

Venezuela, meanwhile, has slipped deeper into an unprecedented humanitarian crisis. The oil-rich nation of 30 million is beset by hyperinflation; power failures; and shortages of medicine, food and water.

Before the election last year, the Caracas polling firm Datanalisis found that nearly 70 percent of Venezuelans blamed Maduro for the country’s woes and wanted him to leave office. Two-thirds of Venezuelans told the Pew Research Center that they distrusted their government, and a majority expected their standard of living to fall.

Through April 6, Guaidó’s approval rating stood at 60 percent, according to Datanalisis. Maduro’s was 14 percent.

“For now, despite the challenges and the harsh situation without apparent solution, Guaidó’s popularity hasn’t been affected,” said Luis Vicente León, who heads Datanalisis. “It’s like a honeymoon.

“Of course, there are still challenges for the future, because it won’t stay the same if he presents no results.”

Guaidó isn’t asking for votes, but he routinely calls his supporters into the streets to illustrate their numbers, and to signal their continuing rejection of Maduro to fellow Venezuelans, to the government and to the international community.

Supporters say Guaidó has succeeded at uniting Venezuela’s long-fractious opposition — an obstacle in previous efforts to challenge Maduro and his predecessor, Hugo Chávez.

“This is the first time in 20 years that the opposition has come together like this,” lawmaker Juan Andrés Mejía said.

“This is our responsibility,” the 41-year-old secretary said.

Guaidó and his international backers, including the United States, were counting on the Venezuelan military to turn against Maduro.

In February, the opposition set up a dramatic confrontation at the Colombia-Venezuela border: a shipment of mostly U.S. aid, to be pushed into Venezuela against a military blockade. Guaidó urged the soldiers to join the opposition and let the aid pass.

But the soldiers mostly stood firm, the event descended into a storm of molotov cocktails and tear gas, and the opposition was left to figure out another plan.

“The people were disappointed,” said Dimitris Pantoulas, a political scientist at the Institute of Higher Education and Administration in Caracas. “The military intervention narrative was a bluff. And once it doesn’t happen, you have to do something.”

The United States, which has put sanctions on Venezuela’s oil industry and officials in the Maduro government, announced prohibitions this week on dollar transactions with Venezuela’s central bank.

U.S. officials say all options remain on the table. Guaidó stresses that his campaign is nonviolent.

Maduro describes Guaidó as a tool of a U.S.-backed right-wing operation bent on regime change in Venezuela. The opposition describes itself as a broad-ranging coalition, from center-right fiscal conservatives to leftist social democrats, united against what they say is the increasing totalitarianism, mismanagement and corruption of Maduro’s government.

Moisés Naím has served as Venezuela’s minister of trade, director of its Central Bank and executive director of the World Bank. He said talk of left and right in Venezuela misses the point.

“The fight against Maduro is not an ideological fight,” he said. “It’s a fight for freedom and to rescue a country that is in the most profound humanitarian crisis in the history of Latin America. It makes little sense to discuss ideology if you have a government that is limiting your freedom.”

Mejía, the lawmaker, is heading the effort to craft Plan País, the opposition’s governing platform. It outlines steps to address Venezuela’s myriad problems.

“For years, the opposition was criticized for diagnosing the symptoms without presenting a solution,” he said. “Now is our chance. We are building a country, not a political party.”

Opposition leaders say Guaidó will serve as interim president while a new government holds elections. While there have been discussions about whether he would be able to run for the presidency after heading a transitional government, Guaidó hasn’t ruled out the possibility, and members of his party said there would be no legal impediments to his candidacy.

Analysts say he is uniquely positioned to lead the effort.

“He’s not from the white middle class,” said political scientist Margarita López Maya, a former fellow at the Wilson Center in Washington. “He’s not from a poor background, but his origins are common. His charisma comes from that — people think he is like them.”

Naím says Guaidó also has benefited from the element of surprise. As a little-known lawmaker from the northern state of Vargas until January, he gave the government little time to discredit him as he ascended.

Guaidó now has the United States and more than 50 other countries behind him, as well as a frustrated population beaten down by the ongoing crisis. His main enemy, Naím says, is impatience.

In the Caracas suburb of Guarenas, neighbors wonder why Guaidó has not visited. They say an opposition leader has not been seen here since 2013.

In a neighborhood where few people have smartphones or reliable Internet access, Rubén Darío is the campaign’s point of contact. The 54-year-old carpenter tells people what Guaidó is up to and where he’s appearing.

Dulce María Mijares, an unemployed mother of three, said she favors the opposition but had not heard about Guaidó’s campaign. She said she was afraid to go to his rallies.

Venezuela’s working-class communities have been strongholds for Maduro and Chávez. Human rights activists and others here say those who join the opposition risk harassment, arrest or killing by masked security forces.

“We need to see [Guaidó] around here,” Darío said. “Maybe if others see him, they will be motivated. If he comes, we’ll protect him in our own way.”

All of Guaidó’s plans are theoretical while Maduro remains in power — which opposition leaders warn could be longer than anyone expects.

“I lived under two dictatorships, democracy and revolution,” said 97-year-old Sista Gómez of Guarenas. “But this, today — I’d say it’s the worst it’s ever been.” 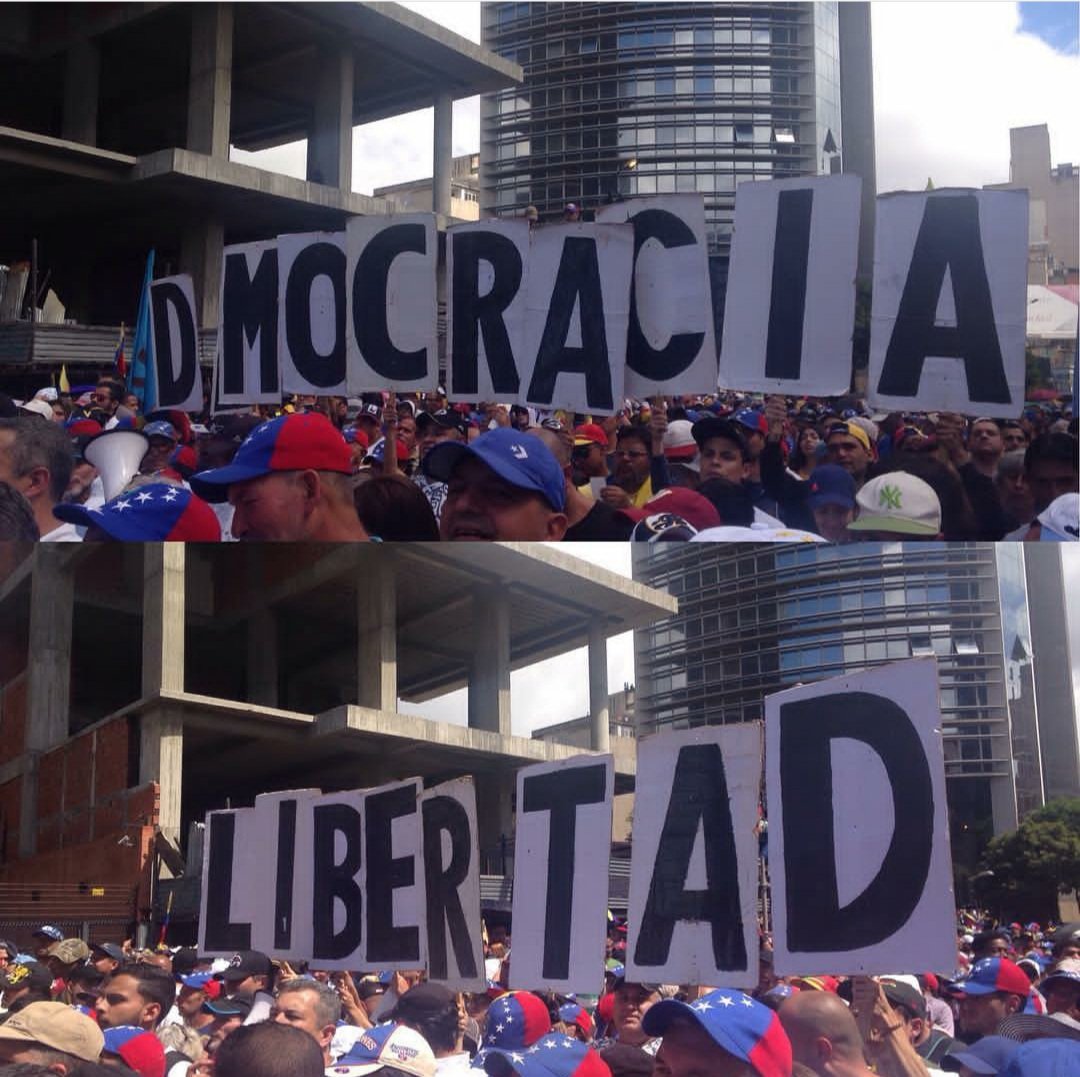