On January 29th, 2019, caretaker President Juan Guaidó appointed Julio Borges as his ambassador to the Lima Group, a mission that expands the work started mid-decade, when the Primero Justicia lawmaker first established contact with foreign governments to expose Venezuela’s situation. A key objective: to block foreign financing to the Maduro regime, “which sought to keep issuing debt without parliamentary approval.”

Borges was elected lawmaker of the National Assembly for Miranda, for the terms 2000-2005, 2010-2015 and 2016-2021. He was Parliament Speaker between 2017 and 2018, and that’s why he attended the Dominican Republic as chief of the delegation. He wouldn’t finish his term: after refusing to sign the agreement proposed by the government, he was forced to flee to Bogota. He was stripped off his parliamentary immunity on August 8th, 2018.

Julio Borges has been one of the main actors of the chain of events that have now placed the Maduro regime in an unprecedented situation of vulnerability. We asked ambassador Borges about his perspective on the people, institutions and places involved in that process.

“He came to Venezuela in 2016, called by the opposition. Specifically, by Un Nuevo Tiempo, Timoteo Zambrano is quite close to him. He had an opportunity to raise alarms about the Venezuelan case and pressure for some kind of political or democratic solution, but he merged with the regime progressively and strangely. He became embroiled with the regime to the point of becoming the main lobbyist for Maduro and the people with political and economic interests in Venezuela. In the Dominican Republic, he didn’t take long to show his true colors. With that, he lost the modicum of prestige he had left, he could’ve played an important role but he chose to defend a dictatorship of gangsters and human rights abusers. We initially didn’t know if he was naive, evil or pragmatic, but then it became clear that he wanted to profit from our tragedy. He wanted to be the champion of that failed left embodied by Podemos in Spain, Evo Morales in Bolivia, Raúl Castro in Cuba and Maduro himself. And he was just beaten.”

“That process took place right before the presidential elections. The opposition went in with very clear goals; we didn’t want a fellowship or agreements out of the agenda. We wanted fair elections, with international observation, with a credible CNE, with the possibility for Venezuelans abroad to vote, without political prisoners or disqualifications, with a National Assembly with full authority and with equal access to mainstream media. We knew then, as we know now, that with those conditions, which are established by law, chavismo would never win an election. But the regime wasn’t there to listen. The government only wanted to pressure us to lift the sanctions. We couldn’t do that, we requested them, when I was AN Speaker, I travelled to Europe and the U.S. myself to request those sanctions.”


The end of dialogue

“They didn’t accept our demands. Not one of them. And what they wanted was unacceptable: acceptance of the National Constituent Assembly. We were demanding compliance with the laws and the Constitution, while they wanted us to bypass the Venezuelan law, and that of sanctioning countries. We left the table. There was no agreement, so we didn’t run on the May 20th elections. That’s why the world disregarded that fraud and that opened the doors to Juan Guaidó’s legitimacy as caretaker President. The Dominican Republic was the necessary requisite for the transition we’re experiencing, because in all the meetings I had with presidents of many countries, they all asked me why we couldn’t give negotiation a chance. Absolutely all of them asked me that. In the Dominican Republic, we closed that chapter and the world finally understood the regime’s true nature.”

“We’ve been aware for a long time that Venezuelans aren’t only facing a corrupt and authoritarian regime. Apart from chavismo, we’re also facing Cuba, their allies interested in Venezuelan resources, and several gangs of international organized crime. The Venezuelan issue overflows our borders. It’s a confrontation between democracy and mafias. That’s why the solution had to involve international effort but, as it turns out, the world was drowning in regime propaganda paid with the country’s money. Very few knew what was truly happening in Venezuela and divulging that truth was a huge effort. It took us many years. And when we won the National Assembly, we focused on legitimizing Parliament (which was immediately attacked,) and delegitimizing Maduro. The breaking point was the sanctions, that’s when we internationalized the conflict. It raised only intermittent interest in global press, but it was the beginning of the end for Maduro’s regime.”

“He has profound internal contradictions. In every sense, he appears as something he’s not. He and his sister have identical behaviors, they only care for power and the privileges it brings when exercised without restraint, and they’re capable of anything to keep and increase that power. They have no boundaries, whether ethical, human or of any other kind. Power and money have corrupted and twisted them to pathological extremes; they’re despotic, cruel, terribly deceitful, they don’t care about politics, it’s all about power, intimidation, repression, submission. They’re dehumanized. That’s why they’re the most important support for people as toxic and primitive as Maduro and Cilia Flores, whom they’ve ensnared and held hostage. I’ve seen Jorge and Delcy Rodríguez blatantly lie before Zapatero and foreign ministers. Jorge Rodríguez once said that he’d never accept ‘a los hijos de puta y coños de su madre,’ like that, with those words, ‘of the European Union in Venezuela.’ And a few months later, he said he was opening the doors for the European Union if they wanted to be electoral observers for May 20th. He treated Zapatero and some Dominican officials as if he were their boss. He nagged them constantly and yelled at them. And Zapatero was absolutely passive about that. While we were in talks, they detained Luis Florido’s daughter at the airport, and Jorge Rodríguez boasted that he did it so we would sign whatever they wanted. He threatened Vicente Díaz and me with prison. All of this in front of Zapatero. That’s why the foreign ministers left before the dialogue ended. The Chilean Foreign Minister once made a statement Jorge didn’t like, and he yelled ‘If that old faggot Chilean Minister doesn’t rectify, I’ll leave.’ This is in front of Zapatero. He was constantly blackmailing. And both he and his sister constantly complained about what people said on social media against them. He just burns in his own resentment. The game had rules and they broke them. We agreed to do it privately, without pictures or recordings, and they did what they did. In front of Zapatero. But we had to go through that, to reach this moment. By refusing to accept our conditions, Maduro embarked in fraudulent elections that stripped him of the little legitimacy he had.”

“I have very good relations and remain in constant touch with him. Venezuela doesn’t know how important an ally he’s been in the international front. Despite being from the same party as Zapatero, he’s majorly committed with our fight, he truly cares about Venezuela and invests many hours on knocking doors, arranging meetings. He’s been very active in giving us his experience with the Spanish transition, so we apply it in ours.”

“He’s as controversial as we know, but we Venezuelans can thank him without reserves. He’s told it as it is in Venezuela’s case. He’s taken measures that have shaken the regime’s foundations, thanks to the sacrifice of the Venezuelan people who took the streets in 2017 for six months, and stirred the conscience of the democratic world. Before that, we visited countries to explain what was happening and nobody knew anything. Perspectives were confused. Now there was a unanimous vision that Maduro was the dictator of a failed state, Trump listened to us, believed us and understood the gravity of our tragedy. He allowed for the construction of a great international coalition that has supported Juan Guaidó.”

“We owe him for the great solidarity and understanding of the Venezuelan drama in Colombia. He always had a clear vision about chavismo and the threat it was for Colombia and its democracy. He’s one of those with sharp understanding of Maduro’s regime as a continental threat and a destabilizing factor for Colombia. I admire his verticality. He holds on to his stance regardless of the price to pay.”

“Recently, in a meeting in Washington, I remembered when I met him back in 2014, during that year’s protests. There was a meeting of Latin American foreign ministers and he attended as minister for Pepe Mujica. He showed the most concern for the human rights violations reported in those days, he was the first leftist figure to disavow Maduro and call him a corrupt dictator and a human rights abuser. Venezuela will always be grateful with the Secretary General of the OAS, who broke all molds and bypassed all diplomatic restraints to take on the defense of our democracy, as one more Venezuelan.”

“I had the privilege of talking with him in a private meeting. Just us. The Pope expressed his frustration because Venezuela kept spiraling into chaos. He wanted to make clear that he’s not aligned with the regime, as they’ve tried to show. I trust that, in the final phase, he’ll help us make the definitive push against Maduro.”

“He’s always been, and will always be, my dear friend and my brother in arms. We’ve worked very close for decades. He’s an honest and coherent politician. Whenever we’ve had disagreements, we’ve discussed them respectfully until we found common ground. He’s sacrificed a lot for Venezuela’s freedom, many people refuse to see that. And he’s been targeted by many smear campaigns, vile and despicable attacks he doesn’t deserve at all.”

“We’re friends since we were kids. We started PJ together. We studied together. For the past two years we’ve been working in complete coordination, in a silent effort: interlocking the opposition and the international work. He’s tenacious and focused. He sets a task for himself and doesn’t yield until it’s accomplished. That has always been one of his traits. When we were kids, he had a sheet in his room where he’d written: ‘Don’t lose focus.’”

“I’m very proud of my party. We started as a human rights organization and now we’re one of the country’s most important political parties, with a generation of young men and women from all corners of Venezuela, militants who have show an immense capacity for sacrifice, from a now imprisoned Requesens, to Fernando Albán, who died for Venezuela.”

“The phrase ‘Guaidó somos todos’ applies here. He’s the materialization, the splendor, the summit of the fight we’ve waged for the past twenty years. He’s the embodiment of those Venezuelans who left, of lonely elderly citizens, of prisoners, of the dispossessed, the humiliated, the deceived and the mocked, the patients without medicines, the children without food or home, the silenced journalists; he’s the synthesis of so many Venezuelans who have fought throughout the years and have given their all. We feel each step he takes as our own. He’s the face of freedom.” 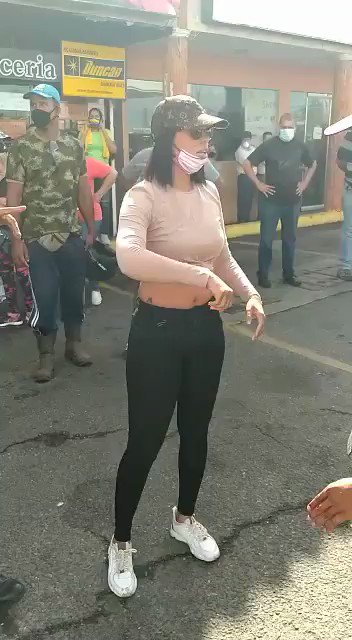